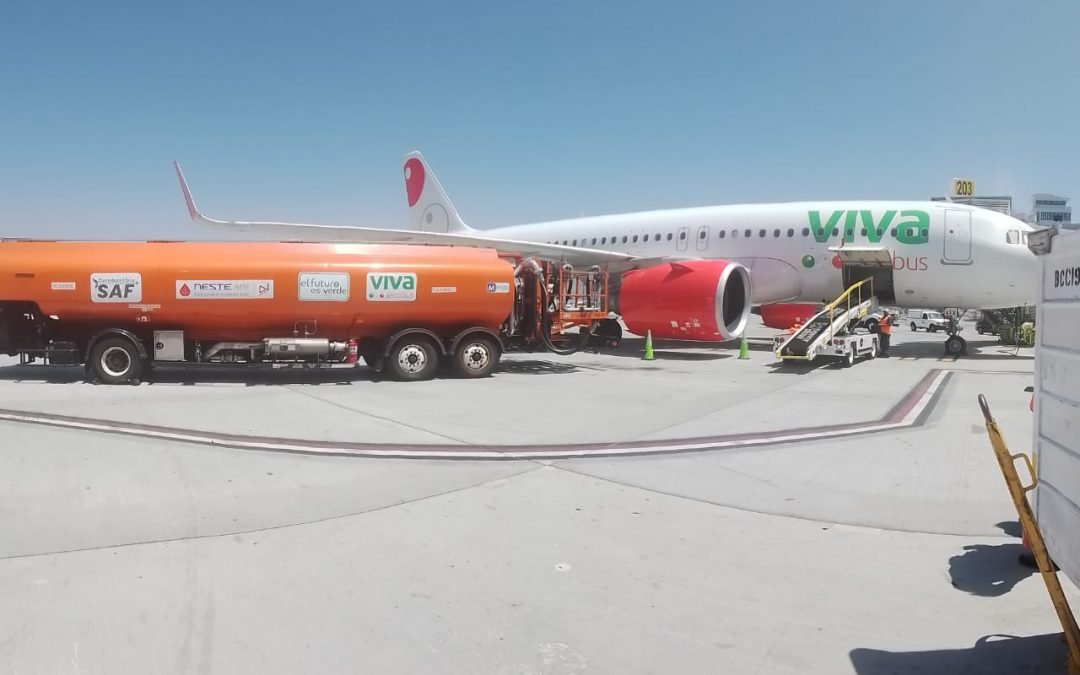 LOS ANGELES, Calif. / July 20, 2022 / AVIATION NEWS – Fulfilling its commitment made on World Environment Day, Viva Aerobus—Mexico’s ultra-low-cost airline—took its first flight powered by sustainable aviation fuel from Los Angeles to Guadalajara on June 15. The uplift was made possible by the partnership between Avfuel and Neste.

The fueling milestone positions Viva Aerobus as a Mexican leader in reducing the aviation industry’s carbon footprint. With a delivery of 7,500 gallons of Neste MY Sustainable Aviation FuelTM, Viva Aerobus was able to reduce lifecycle carbon emissions by 21 metric tons, the equivalent of the amount of CO2 sequestered by 24.9 acres of U.S. forests per year.

Viva has set an ambitious goal to purchase 1 million liters (or nearly 265,000 gallons) of SAF. To reach this goal, Avfuel and Neste are collaborating with Viva on a potential long-term SAF supply agreement. Neste, with its global, fast-growing SAF production, and Avfuel, with its global distribution logistics expertise, are uniquely positioned to help Viva achieve its SAF commitment.

“Viva’s SAF flight, its most-eco-friendly flight, [was] a milestone for efforts to decarbonize our industry …” said Juan Carlos Zuazua, CEO of Viva Aerobus. “We are excited to take this big step in Mexico’s aviation history aimed at reducing GHG emissions. We keep strengthening as the greenest Mexican airline, having the lowest number of CO2 emissions per passenger in the country. We are always looking for new ways to add value to our service, not only through low fares and reliability, but also by creating an airline industry focused on sustainability. When using SAF, for instance, we contribute directly and indirectly to 10 of the 17 Sustainable Development Goals of the United Nations’ 2030 Agenda.”

Viva is guided by its environmental culture “El Futuro es Verde” having as one of its most significant goals to reduce its CO2 emissions per seat per kilometer and CO2 emissions per passenger per kilometer by more than 15% by 2025. This goal will be possible thanks to Viva’s disciplined operation, characterized by high load factors and the advanced technology of its aircraft; the airline boasts the third youngest fleet in North America (at an average of five years) with highly efficient and new generation engines, maximum seat density and non-stop direct flights.

Today, sustainable aviation fuel is the most effective way to reduce a flight’s carbon footprint. In the future, SAF could deliver up to 80% less greenhouse gas emissions over its lifecycle versus traditional jet fuel if used in its neat, concentrated form.

Neste MY SAF is made from sustainably sourced, renewable waste and residue materials—such as used cooking oil. It is a fully approved drop-in fuel that, once blended with petroleum jet fuel, meets ASTM D-1655 specification for conventional jet fuel and performance standards under all operating conditions. This makes Neste MY SAF an optimum solution to directly reduce greenhouse gas emissions from aircraft, requiring no new investments, modifications or changes to the aircraft, fuel distribution procedures or airport fuel storage tanks.

Those interested in learning more about sustainable aviation fuel are encouraged to visit Avfuel.com/SAF or contact Keith Sawyer, manager of alternative fuels, at [email protected] for more information.

Viva Aerobus is Mexico’s ultra-low-cost airline. It started operations in 2006 and today it operates the youngest Latin American fleet with 58 Airbus: 40 Airbus A320 and 18 Airbus A321. With a clear vision to give all people the opportunity to fly, Viva Aerobus has democratized the airline industry with the lowest fares in Mexico and the lowest cost structure in America, making their flights the best value offer. For more information please visit: www.vivaaerobus.com/en

Avfuel provides fuel and services—including sustainable fuel and initiatives—to the global aviation industry and is the leading independent supplier in the United States. Established as a supply and logistics company nearly 50 years ago, Avfuel is core competent in every aspect that surrounds the delivery of fuel—from refinery to wingtip. Avfuel combines global access with personalized service throughout a fueling network of more than 3,000 locations worldwide and 650+ Avfuel-branded FBOs. Our 100% dedication to aviation demonstrates our passion and commitment to a global community that prospers on the movement of goods and services around the world.

Neste (NESTE, Nasdaq Helsinki) creates solutions for combating climate change and accelerating a shift to a circular economy. We refine waste, residues and innovative raw materials into renewable fuels and sustainable feedstock for plastics and other materials. We are the world’s leading producer of renewable diesel and sustainable aviation fuel, developing chemical recycling to combat the plastic waste challenge. We aim at helping customers to reduce greenhouse gas emissions with our renewable and circular solutions by at least 20 million tons annually by 2030. As a technologically advanced refiner of high-quality oil products with a commitment to reach carbon-neutral production by 2035, we are also introducing renewable and recycled raw materials such as waste plastic as refinery raw materials. We have consistently been included in the Dow Jones Sustainability Indices and the Global 100 list of the world’s most sustainable companies. In 2020, Neste’s revenue stood at EUR 11.8 billion, with 94% of the company’s comparable operating profit coming from renewable products. Read more: neste.com