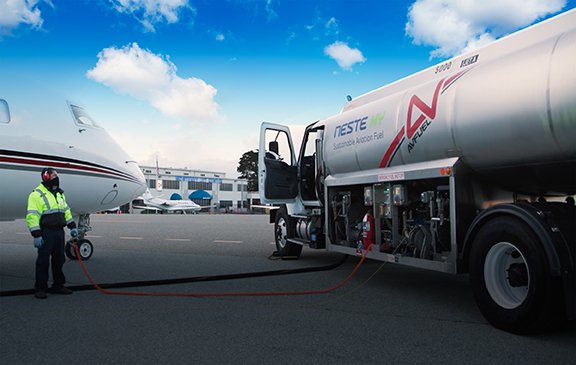 With Avfuel’s book and claim program, customers can buy a full load delivery of SAF and receive credit for the emissions reductions benefit it provides no matter where they are in relation to where the fuel is delivered.

“We’re thrilled to now make SAF more attainable for our customers worldwide,” said Keith Sawyer, Avfuel’s manager of alternative fuels. “Sustainable aviation fuel is the most effective way to reduce a flight’s carbon footprint, and book and claim is the single-most effective way to make SAF attainable for customers no matter where they fly. SAF production is largely isolated to the Western U.S. Trucking the fuel to the opposite end of the country where a customer may want SAF is not only less efficient and costlier—particularly given the truck driver shortage—but also affects the lifecycle emissions reduction benefit of SAF. Rather than moving the SAF molecules, it makes far more sense to move the accreditation.”

With Avfuel’s book and claim program, a customer can purchase SAF (the claim) no matter where they’re located—paying the premium cost for SAF over jet fuel and, in return, receiving the credit for its use and applying it to their ESG scores. This SAF is taken off the book at an airport where the physical SAF molecules are held and being uplifted by customers who are simply paying for jet fuel and do not get to claim credit toward using SAF in their ESG scores.

The entire system is conducted in a compliant manner so that the benefit of the SAF molecules can’t be double-counted. Only the SAF purchaser—no matter where they are based—receives credit for that SAF’s emissions reductions.

“It’s not unlike carbon offsetting whereby you can pay to invest in green projects and receive credit toward carbon emissions reductions,” said Sawyer. “The difference is that emissions are being directly reduced by an operation through the use of SAF, rather than simply offsetting emissions that have already been produced.”

Customers who are interested in purchasing SAF through Avfuel’s book and claim program are encouraged to contact Sawyer at [email protected] or by reaching out to their designated area manager at 734.663.6466.

Avfuel’s book and claim program is one of a number of sustainability solutions the fuel supplier offers or is working toward, in addition to sustainable aviation fuel (SAF), a Carbon Offsetting Program, unleaded avgas, and a pledge to offset its own emissions. These initiatives are in response to Avfuel’s commitment to identify, develop, provide and advocate for sustainable solutions, making it Avfuel’s duty to promote environmentally responsible operations at its properties and throughout the Avfuel Network, in addition to facilitating initiatives to help customers reach their sustainability goals.

Those interested in learning more about all of Avfuel’s sustainability initiatives can visit Avfuel.com/Sustainability.

Avfuel provides fuel and services—including sustainable fuel and initiatives—to the global aviation industry and is the leading independent supplier in the United States. Established as a supply and logistics company nearly 50 years ago, Avfuel is core competent in every aspect that surrounds the delivery of fuel—from refinery to wingtip. Avfuel combines global access with personalized service throughout a fueling network of more than 3,000 locations worldwide and 650+ Avfuel-branded FBOs. Our 100% dedication to aviation demonstrates our passion and commitment to a global community that prospers on the movement of goods and services around the world.