Banyan Air Service Recognized by the City of Fort Lauderdale 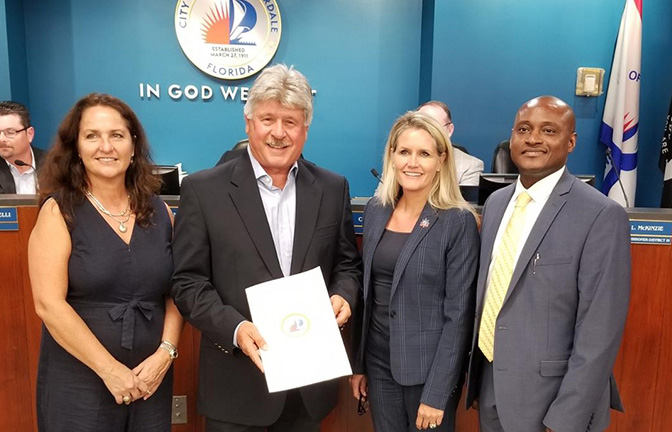 Banyan Air Service Recognized by the City of Fort Lauderdale

The proclamation was signed by Mayor Dean J. Trantalis and read by Commissioner Heather Moraitis during the City Commission regular meeting held at City Hall on Andrews Avenue in Fort Lauderdale.

The proclamation highlighted some of the achievements and recognitions of Banyan during the last 40 years and also mentioned Banyan’s commitment to rebuilding a hospital and nursing school in a small village of Egbe in rural Nigeria, West Africa where Don Campion was born and raised.  The result of this commitment is that the hospital now provides medical and health care to over 1800 patients per month who otherwise would have no access to these critical health and training services.

Upon receiving the proclamation, Don Campion said, “Thank you very much for this recognition, Mr. Mayor and Commissioners.  Our vision has always been in alignment with that of the City of Fort Lauderdale.  We really strive to attract businesses and at the same time bring a big benefit to the neighborhoods around us.  It’s been a joy of my life’s work being at Executive Airport and working with the management and city in creating one of the best airports in the country.  We hope to match that reputation in our aviation services.”