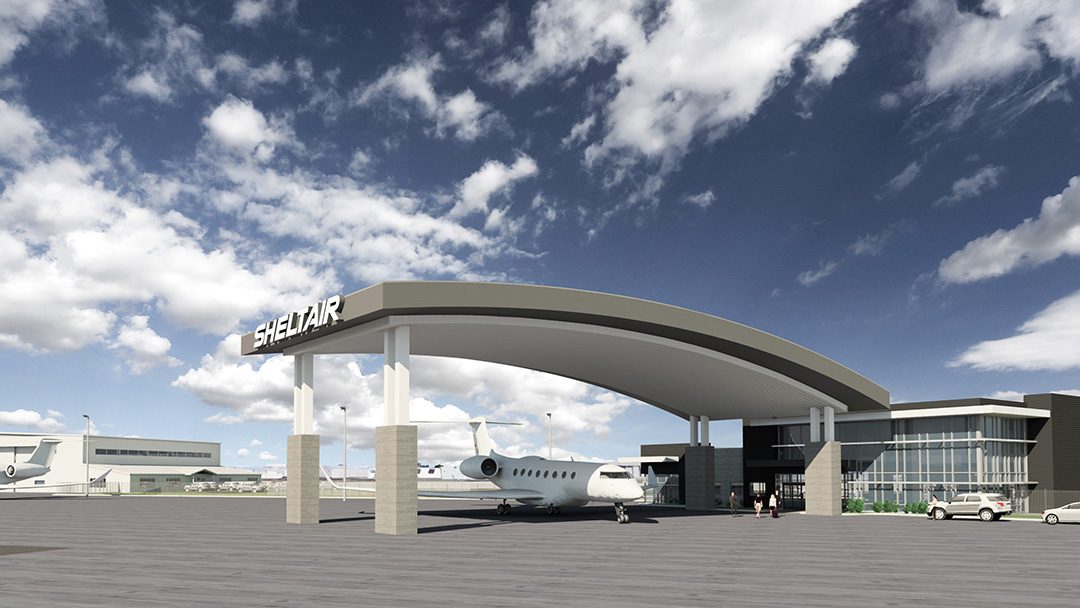 Broomfield, CO – Sheltair Aviation, one of the nation’s leading aviation services companies, today announced that it will be serving the general aviation community with a full-service FBO at Rocky Mountain Metropolitan Airport (KBJC), opening a state-of-the-art temporary facility while a permanent multimillion dollar FBO complex is under construction that will offer a new terminal, build-to-suit hangar and office space opportunities.

The agreement marks Sheltair’s first corporate presence west of the Mississippi and reflects the national strength of a company that, for more than thirty years, has grown its reputation for service and safety at airports along the Eastern Seaboard.

While it may be “temporary,” Sheltair’s KBJC complex will include a beautifully appointed passenger lobby and reception area complete with a fireplace that looks out at an expanded ramp, along with ground handling and fueling support equipment. In addition Sheltair is a proud Avfuel-branded FBO and will offer Avfuel Contract Fuel and AVTRIP Rewards.

Phase one development plans include a new 10,000 square foot FBO facility, a new 35,000 square foot hangar and a new fuel farm on 10 acres at KBJC which is located in Broomfield, approximately 15 miles northwest of Denver’s downtown and some 15 miles southeast of Boulder.  The emerging development will give those traveling to the Denver region and the mountain areas a number of options to reposition their aircraft where new services will become available.

A study in meeting market demand

Jerry Holland, founder, chairman and CEO of Sheltair, stated, “Our newest corporate address in Colorado reflects the natural progression of a company that carefully studies the market, identifies communities that embrace general aviation, considers the role of airports in supporting regional economies and the vision of local officials. Based on this criteria, it was easy to conclude that Sheltair wanted to be at Rocky Mountain Metro Airport.”

Todd Anderson, Sheltair Senior Vice President for Real Estate and Development, observed, “When we look at an FBO location we view our efforts as part of a partnership with airport operations, local elected officials, the community beyond the fence and, of course, our customers. There is a synergy we look for that ensures success because we have long known that an FBO is more than brick and mortar. That is why we are so enthusiastic about coming to KBJC for there is a self-evident blue print for success.”

Airport Director Paul Anslow remarked that the airport is the fourth busiest airport in Colorado and during 2017, handled 170,553 aircraft operations, an average of 467 per day.

“We are proud of the fact that our priorities are customer service, safety, and the creation of a business-friendly environment. We offer the aviation community unequaled service and this is particularly important when meeting the needs of those traveling for business, pleasure, or both,” Jefferson County Commissioner Libby Szabo stated.  “Sheltair’s arrival reflects the continuing execution of the airport’s master plan that calls for a series of carefully thought out expansions with professional partners with whom we have complete confidence.”

The Rocky Mountain Metropolitan Airport, located just west of Denver in Jefferson County, is the 4th busiest in Colorado.  Our priorities are customer service, safety, and a business-friendly environment. The Airport Director and staff are committed to ensuring that pilots, passengers, and business executives enjoy their visit to the Denver area and can access an operationally safe and efficient airport, 24 hours a day, 7 days a week in any weather condition. Learn more at https://www.jeffco.us/755/Airport.